Hello , I am an ex Scientologist , this blog is primarily about that but I may address other topics as the mood hits me to . I was in Scientology for 25 years and spent about 10,000 hours using the indoctrination and thought reform method "study tech " . I also spent time on staff and met hundreds of Scientologists and did hundreds of the cult practices . Many were the "ethics cycles and OW writeups " that really are an attempt to suppress or remove a person's identity and replace it with a mental pseudo clone of Ron Hubbard . To make a fanatical slave for the cult .

I looked outside the cult for answers in about January 2014 and left the cult in about March of 2014 . While in about 99% of members have no idea of the truth .

We are told we are in a mental therapy or spiritual enhancement or religion or science for helping people unlock potential . Or any of several other fronts that all pretend kind and humanitarian goals .

The truth is Scientology is a terrorist mind control cult and this blog is my attempt to understand and expose that . And try to state as clearly as possible the tools that I have found helpful in dealing with this .

Basic Introduction to Hypnosis in Scientology 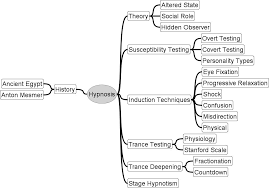 Hypnosis is classed as a psychological rather than a physiological method because it is essentially a form of highly focused mental concentration in which one person allows another to structure the object of the concentration and simultaneously suspends critical judgment and peripheral awareness. When this method is used in a cultic environment, it becomes a form of psychological manipulation and coercion because the cult leader implants suggestions aimed at his own agenda while the person is in a vulnerable state.  (page 151 Cults In Our Midst by Margaret Singer)

This thread is to go back to an idea that is a fundamental to understand what Dianetics and Scientology are and how they function.This comes up in auditing and training and in many other forms and aspects of all Hubbard doctrine.

I want to go in a specific and different direction. First I want to bring up one of the most basic and to me truest ideas about hypnosis: HOW to cause it.

the induction of a state of consciousness in which a person apparently loses the power of voluntary action and is highly responsive to suggestion or direction. Its use in therapy, typically to recover suppressed memories or to allow modification of behavior by suggestion, has been revived but is still controversial.